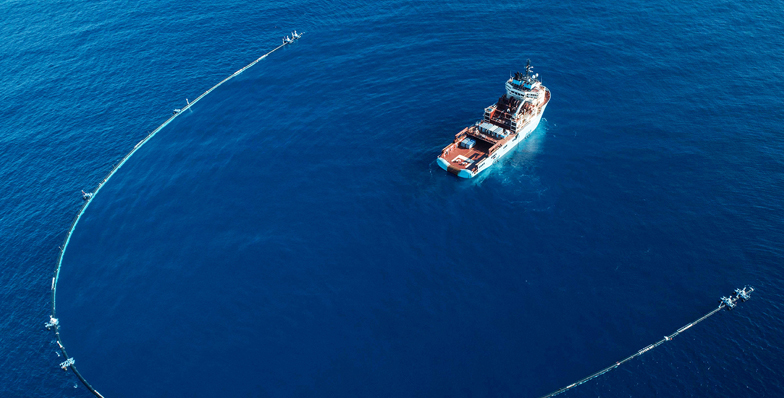 In September 2018, the first offshore cleaning system was installed by Maersk Supply Service’s anchor handling tug supply vessel, Maersk Launcher. This vessel is under crew management of BSM Germany and is located in the Great Pacific Garbage Patch, 1,200 nautical miles off the coast of San Francisco.

The Ocean Cleanup, a non-profit organisation, has developed a passive system which moves in tandem with the ocean currents in catch of floating plastic debris. The system consists of a 600-metre-long floater that sits at the surface of the water and a tapered 3-metre-deep skirt attached below. The floater provides buoyancy to the system and prevents the plastic debris from flowing over it, while the skirt stops the debris from escaping underneath. As the system moves through the water, the plastic debris continues to collect within the boundaries of the U-shaped system.

The system uses the natural current of the sea in order to collect all the plastic debris. Since the system is operated by the wind and waves, the floater remains on the surface, with the plastic debris being primarily underneath it. This results to the system moving faster than the debris, capturing it with a net as the BSM crew pulls it onboard. The plastic debris is then recycled and turned into high quality products such as chairs, car bumpers, sunglasses or even phones.

This revolutionary initiative will lead to a 50 percent reduction of the Great Pacific Garbage Patch within the next five years and BSM is proud to be a part of it with its seafarers playing an active role.

To watch some educational videos on this non-profit organisation, visit The Ocean Cleanup YouTube Channel.